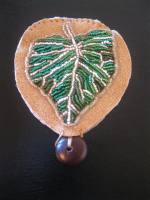 Because it's a healing plant and because someone wanted one. I'm dazed by the speed that some of these things are coming with... I don't know it's like automatic writing sometimes I don't remember doing all of it, is that exhaustion? Mania? 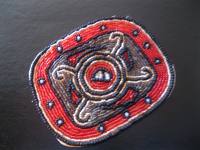 Those Cahokia eyes keep getting to me. I don't know what to say about this at all unless that it's a gift to a sundancer. I need a nap before my work gets any more disturbing... although I have a great idea for a piece.. 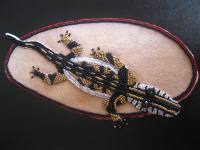 More work for my son. This one feels different to me somehow and was certainly different to make. Some baby gators have dramatic coloring, as this one does. I intend to post individual parts of my boy's regalia and then, if he will let me, him in his outfit. 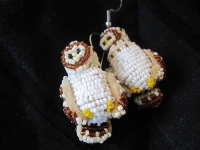 These were made as a commission from a well known Cherokee writer and publisher. They are just over an inch in length and are beaded with size 15 beads. They were not work I undertook lightly or without being informed. Most Native people and educated non-Natives alike believe that owls are always a symbol of evil and death in Native communities. This is not always true. In Cherokee owls are problematic, powerful and they have their gifts to offer. I would not make another pair of these, but they came out so well I thought I'd share (erm... show off). With everything that has been happening in my personal life lately, and there has been quite a lot happening, my work is evolving in ways I didn't predict. These little guys are an example of that. 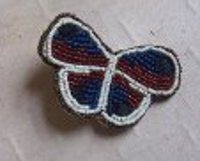 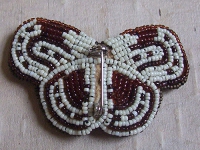 Ok... so I was in a butterfly mood. Why not? My youngest has always loved them. This pin was a gift for someone who is engaged in creating transformation. It seems appropriate. 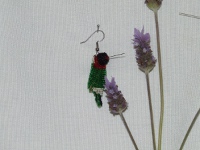 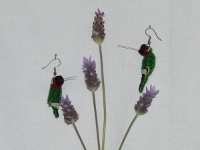 Hummingbirds... mostly just had a funny thought about using a head pin for the beak. These were trickier than the owls, as it would have been a bit difficult to get the wings in 'flying' position and hummingbirds are not known for stasis... This particular color scheme is from a bird from the East Coast. I liked the black and red vibe. Anyway... was for a friend's mum. Ok... a bit staged for the photo, but I like it... more active. 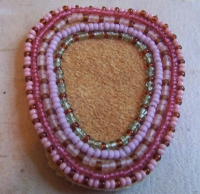 I've been playing with these a bit for about, oh, six months. They open and there is a pocket inside for whatever thing: a small braid of sweetgrass, a chunk of angelica root or what pleases the owner. They can be worn on any chain or string of beads. Lockets have been magical for me since I was a small child. It's making me happy to be beading some. This particular locket is a donation for the Intertribal Friendship House in Oakland, CA. It's maybe 2-1/2 inches on the long side, the beads are the standard 11/0 glass, and the base is smoked deerhide. I understand that it will be part of an auction at the end of September 2010. The Intertribal Friendship House has provided incalculable services to the Native communities of the San Francisco Bay Area for many years and I am honored to contribute in this small way. 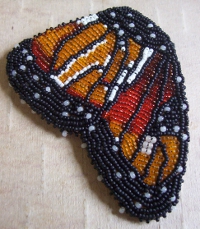 So... monarch butterflies are almost a cliche in beading as are eagle feathers and snakes... I've done all three so there you are. This little item I made for myself and I'm well pleased. In between pieces that have taken me seven months to finish, four months to get one bit finished, and other varying times and pieces this was by way of an amuse bouche. Sometimes it's important to hit a visual and creative reset button and you gotta love orange and black in the fall. We also live close enough to where these guys migrate to go see them in their thousands pretending to be leaves, a thing my children and my friend Greg and I have tried to do every year in October. The beads are size 15/0 and now I'm ready to get back to some heavier work. 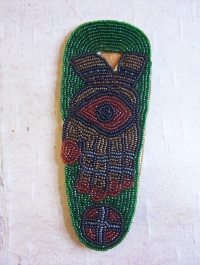 It may be insufficient to say that this piece is inspired by work from Cahokia... erm... I wanted this for me so I made it. Cahokia and mound culture generally are quite the touchstone for South Eastern people these days. As we all do the work of moving forward in our cultures it's useful to cast an eye back. Rich material culture eh? Just you wait for the frogs... 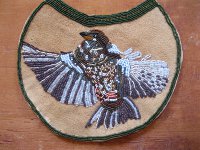 A neckpiece made for a friend to wear with her regalia. For those who always ask: no not traditional in any special particular. I did have the shape of the old metal gorgets in mind, partly because of the shape of the bird, but otherwise just a thing I've made. I do seem to know rather more than the usual number of bird affiliated folk. Backlit sparrows have this very blue cast to their underwing feathers and many of their primaries go transparent. It was an interesting challenge to capture some of that. I'm not sure if I managed, the piece is too newly finished for me to see it properly.

A retirement gift for an amazing friend and curator. They gave me every latitude in design and so I chose some of the old mound designs that are so resonant for me at this moment. With every hope for her success...

Every so often I try to go back to very core images in my work. The petroglyphs along the Hiwassee are the closest thing there is to the seeds of culture. Very pared down and beautiful. They often occur right next to mortar holes or nearby them. Food and story eh?

I go through phases where certain images haunt me a bit. I don’t mean that in a spooky Scooby Doo sort of way, or a piper on the battlements sort of way; but they keep presenting themselves in my mind’s eye and I have to deal with them before I stop seeing them. I’m having that experience with these eastern petroglyphs. I would call them a thing from my dad’s culture but all of the stories I know about them suggest that they predate our presence in old Cherokee. They do have many stories associated with them and that’s probably part of my current interest. At any rate, salmon pink and with what my friends are calling a sand hapenny fossil. These glyphs are so pared down they could be modern symbols of currency or an indication that you should key your guided audio tour or something... 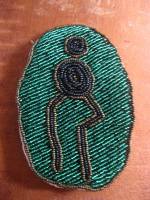 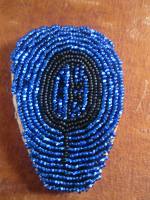 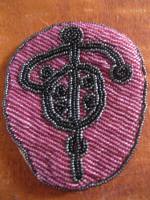 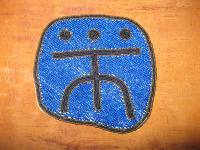 These images are all taken from petroglyphs from Track Rock. They are all thought to be astronomical in nature. 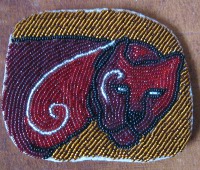 So... another red animal. There are an array of sites, books, stories about Cherokee color theory. Some of these are good, some indifferent and some so very far off that they provide hours of amusement. I’m in no position to lecture on this subject. I will say that in a fair few old Cherokee love poems (for lack of a better designation, they have been called spells, incantations, formulae etc. but as a poet I like ‘poems’) the image of a red panther is evoked. This boy here is a red panther. I suspect that there will be more red animals coming up, judging from my current poem output. Both this panther and the rattle frog have their roots in my current hunt through images of effigy pipes from the Ohio River mounds. The frog has more detail, but he is also more than twice the size of this guy. 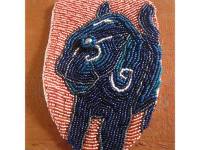 This is an image of Underwater Panther, an old mythic being found in stories and as the subject of imagery in Cahokia and other archeological sites. 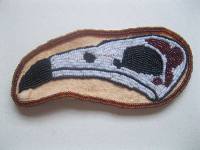 A raven skull... for a friend who is a pagan. This piece bothered me until I completed it. It looks lovely on her. 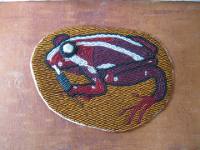 An image taken and modified from an old fetish pipe. This is actually the color scheme of a real frog. Nature is a continual wonder. 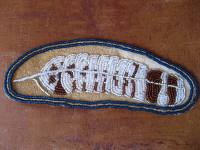 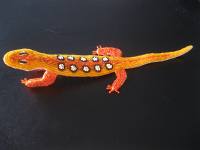 The poisonous juvenile version of of the Eastern Newt. Do look them up, this is actually their color.